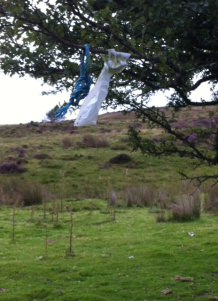 Breda, Molly and I walked in the mountains this morning.  The sky was grey and heavy looking but we felt sure that it would not rain. It is always a pleasure to be in such a high and empty place after only a ten minute drive from home. The heather is in bloom.  From a distance it shows itself as a smudge of colour across the hills. Up close it is brilliant and reads as many different shades of pink and rose and purple. The sheep scattered around are all looking wretched.  They have been shorn.  Their skin looks scruffy and baggy.  The red or blue paint markings look more like bruises and wounds because of the lack of hair. The mountains are all commonage which means more than one farmer can feed his sheep up there.  There are no fences.  The coloured markings are all that distinguish one farmers sheep from another farmers sheep. The sheep meander about in groups. They run away at the slightest provocation or sometimes for no reason at all. Many of them were interested in Molly but she is too well-behaved to chase them.  At times I think they set off running just to see if she will give chase.

We walked past a tree with a knot of blue rope hanging from a branch.  There was a piece of white plastic hanging beside the rope.  I did not have paid much attention to either thing.  Breda told me that they had been put there to mark the way for the recent mass at the Mass Rock. I have never been to the yearly mass up there since I do not go to any mass ever except for the occasional Funeral Mass. Now I wish I had gone to this mass.  We saw tracks from a tractor. Breda told me the tractor pulled a trailer load of people up to the Mass Rock. The people were all standing up in the trailer.  There were no seats and anyway there was no room to sit.  The passengers were all people who would not walk or could not walk up to the rock. Most of the people in the trailer were older people. Maybe some mothers with small children were in the trailer too. Everyone was packed in upright and the number of bodies held up the rest of the bodies. Other people walked up from wherever they were able to park to get near to the Rock.  The little single track road was completely blocked by cars. The rope and the plastic were tied onto the branch just in case people lost their way on route through the boggy undergrowth.

The house on the hill opposite has been under construction all summer. We are increasingly aware of it.  The scaffolding has now been removed.  A red van has been parked in front for a few days now.  The van looks tiny from here but the red draws my eye.  The gap left by the tree which we removed for the internet signal makes the house more visible.  It was easier to ignore it before.  The house is big.  It is too big. It is annoyingly symmetrical.  It is at least three kilometres away as the crow flies and eight kilometres by road. I fear this house will be the kind of house which wants to show itself off.  It will be the kind of house which shines lights on itself at night so that any people passing will not be able to miss it. It is on a road with almost no traffic.  The blinds will be pulled down so the people inside will not be disturbed by the lights but for us far across the valley we will be constantly reminded of this house. I hope I am wrong about this.

We have had no internet since Saturday.  Our signal comes off the roof of Michael Hickey’s house.  As always when there is a signal problem, we telephoned Michael. He told us that his own service is just fine.  We had to wait until today when the office in Waterford was open.  They sent up two Polish men with ladders and binoculars.  The men did things inside the house and they did things outside the house. We cut down a tree two weeks ago to clear the Line of Sight which makes the internet signal possible. For a while we had a signal, but then we did not. The tree could have stayed where it was. The men decided to hook up the signal box from one side of the chimney.  That did not work.  One man waved a receiving box in the air on the end of a long stick while the other kept an eye on his computer, and shouted back and forth in Polish.  Finally they found a spot one and a half metres above the flat kitchen roof. They put up the box on a bracket and a pipe.  It looks pretty awful.  We are trying to convince ourselves that it is not so bad.  We are trying to remind ourselves that we want the internet and that for now this is the only way we can have it down in this valley.  We are trying to convince ourselves that we will learn to love this box on a pole.   It looks like we are living in a submarine.

Potatoes which fall apart when they are cooked will always fall apart when they are cooked.  These terrible potatoes cannot be trusted for making potato salad.   Potato salad made of cooked floury potatoes becomes a kind of cold mashed potato mush with some salad-ish seasoning.  Today I saw pots of it in the deli section of the supermarket.  It was labelled Smooth Potato Salad.  It is a shocking thing to receive this when anticipating potato salad.